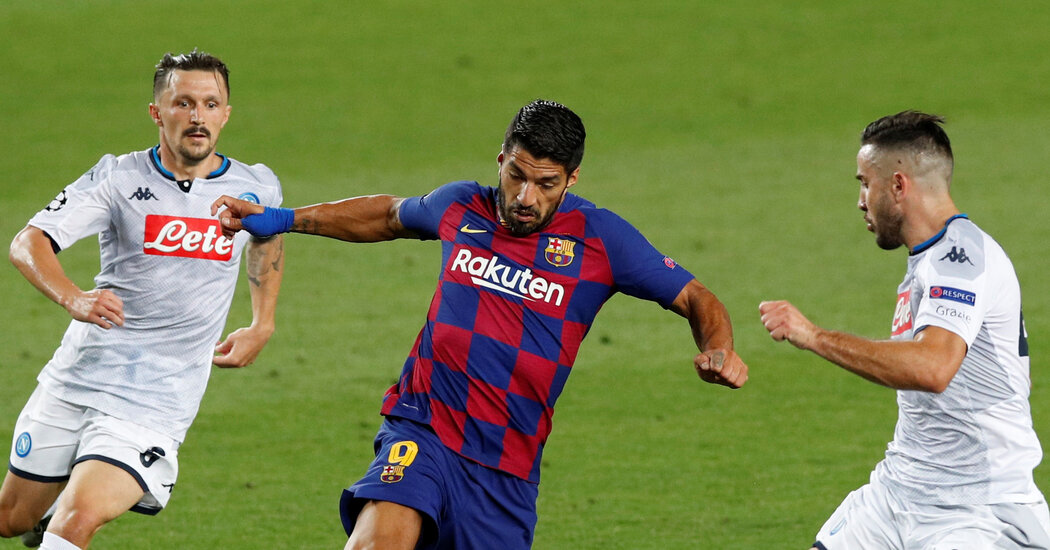 Becoming Italian is usually a lengthy undertaking. The paperwork requires evidence of family links and police checks, as well as proof of the ability to speak Italian to an acceptable level. The process often takes years.

But not, it seems, if you are a star professional soccer player.

This week, investigators opened an inquiry into a citizenship application by the Barcelona striker Luis Suárez, who is Uruguayan, claiming that his Italian-language test was rigged, allowing him to go through the entire process much faster. Suárez was rumored to be on the verge of a transfer to the Italian club Juventus, which has already reached its limit of non-European Union players. He is now expected to join Atletico Madrid instead, as the team announced it had reached a transfer agreement with Barcelona.

The apparent efforts to fast-track Suárez’s application have prompted fury from those forced to go through the regular, often long process, and have dragged elements of Italy’s immigration regulations under the spotlight.

According to a statement on Tuesday from Raffaele Cantone, the chief prosecutor in the Italian city of Perugia, the home of the university that administered Suárez’s language exam, the player’s test showed irregularities. The topics covered were “pre-emptively agreed with the candidate, and the relative score was attributed even before its execution,” the statement said. Suárez was awarded a grade high enough to satisfy the citizenship requirements despite his teachers having noted an “elementary knowledge of the Italian language” during his online classes, investigators added.

The Suárez case has infuriated others who have tried to go through the citizenship process, particularly second-generation immigrants, who cannot apply for citizenship until age 18 and then face a battle with paperwork that can take years to complete.

“Italy is one of the European countries where foreign residents have to wait the longest to become citizens,” said Giulia Perin, a lawyer with the Association of Juridical Studies on Immigration, an advocacy group. “And after 10 years, once they qualify, the authorities have up to four more years to complete the procedure, there are just so many people waiting.”

Fatjona Lamçe, an activist for immigrant rights who is from Albania and is married to an Italian, said the controversy exposed the flaws of the system.

“In a short time, Luis Suárez can take the test and be in the position to become a citizen. That’s how long it takes to make all the checks and complete the process,” she said in a phone interview. It showed, she added, “the decision to make the process take four years is a political one.”

Although Lamçe’s husband and two daughters are Italian and she has lived in Italy since the 1990s, her case has been pending for over three years, she said.

Although he is approaching the end of his career, Suárez, 33, is a big name in soccer. Before transferring to the Spanish giant Barcelona in 2014 for a fee at the time worth more than $100 million, he played for Liverpool in England and Ajax in the Netherlands. While representing Uruguay in the 2014 World Cup, he earned a four-month ban for biting an opponent, the Italian defender Giorgio Chiellini.

His contract for Juventus, the Italian champion, would most likely have been worth millions of euros per year. In a curious twist, Chiellini also plays for Juventus.

Suárez’s wife is of Italian descent, and her Italian passport granted him the opportunity to apply for citizenship without having 10 years of residency. Obtaining an Italian passport would have allowed Suárez to join Juventus despite the Turin-based club having already reached its limit of non-European Union players. While he is no longer expected to join the team, no decision on his application has yet been released.

According to a report in the Italian daily Il Corriere della Sera, a lawyer for Juventus contacted the University for Foreigners in Perugia to promise more business in exchange for preferential treatment for the player on his test.

The lawyer, Maria Turco, denied any business agreement with the university and said that her words had been taken out of context. Juventus has so far declined to comment and Suárez has not publicly addressed the allegations. The university did not immediately respond to requests for comment.

At the time of Suárez’s test, Stefania Spina, a professor of linguistics at the university who tutored him, posted on Twitter that “It was a pleasure having you as a student!” alongside a picture of her with the player.

But phone taps by investigators that have emerged in Italian news outlets suggested that she was not as impressed by his language abilities as her post implied.

“Today I have the last class and I need to prepare it because he doesn’t utter a word of Italian and spending two hours with someone like him is not easy,” she reportedly said about the player while investigators listened. “He will pass, because with 10 million euros a season, you can’t make him skip that because he doesn’t hold the B1.”

The level B1 is the standard required by the citizenship process and indicates intermediate-level knowledge of a language. Italy only recently instituted a successful language test as a condition for citizenship, and extended the waiting time for applicants, as part of the so-called security decree introduced by Matteo Salvini, the anti-immigrant former interior minister.

Italy’s immigration law is not based on birthright, but on blood ties. Children and grandchildren of Italian emigrants can therefore have citizenship and can vote, despite never having set foot in the country, but children born in Italy to immigrants have to fulfill the various criteria and apply before they can obtain those rights.

Igiaba Scego, a Somali-Italian writer, said in an editorial in the Italian newspaper Domani that the system needed review. “I am not asking that Italy cuts its blood ties with the old emigrants,” she said. But it is time that the country adopted birthright citizenship, she wrote, to “project itself into the future” and “finally accept being a plural country.”

“This would be real news,” she added. “Not if Suárez moves to Juventus or not.”

Newcastle, Saudi Arabia and the Power of Words